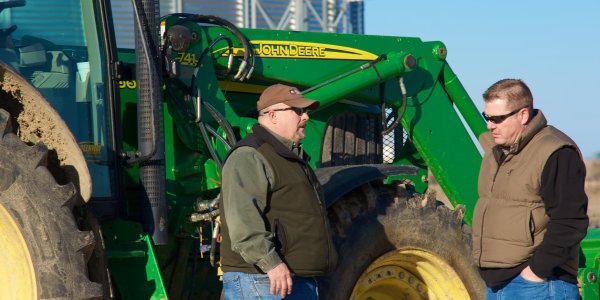 Rick Crawford understands the challenges facing farmers in the First District.  Rick has been a trusted voice in Congress for ag producers and all those in the agriculture industry.

I’m standing up to my party’s leadership to demand a floor vote on the Farm Bill as soon as possible, and I want you to know the facts about my work for Arkansas ag producers.

I joined 77 other lawmakers on a bi-partisan letter to the House leadership of both parties calling for a vote on the bill.  I’m also helping lead the effort behind a discharge petition when Congress goes back into session in September.  A discharge petition would require 218 signatures from lawmakers to force a floor vote on the bill.  I am working over the next month to help my colleagues build support for that effort.

Our farmers need the certainty that a full five-year farm bill would provide.  They are small business owners who must be able to plan and determine what investments to make in order to keep farming.  I will continue to do everything within my power to get a vote on the Farm Bill and to help build support for the bill among my colleagues.

As someone who owned a small business and ran for Congress to try to change the institution to be more effective, it is frustrating to me that this work has gone unfinished.  Rest assured I will keep pursuing every option available that could be helpful in moving this legislation forward.

My campaign has started a Facebook page dedicated to my work for Arkansas agriculture.  I hope you will “Like” and share this page with others.  [link]

The President, my opponent and their allies will continue the false attacks, and I need your help to make sure we get our message and the facts out.  I hope you can volunteer [link] to help my campaign and sign up to receive our emails [link].

I am deeply grateful for your continued support and encouragement.

The Facts About Rick Crawford’s Work for Arkansas Agriculture

Democrats have only 40 votes on the House floor for the farm bill.

“Even after it cleared the committee, and Peterson promised to secure at least 40 Democratic votes for the bill on the floor…”

Rick Crawford is skipping the Republican National Convention to stay in Arkansas and help ensure struggling farm families get the help they need.

Rick Crawford founded the House Rice Caucus to be the voice for Arkansas and the nation’s rice producers in Washington.

“The inaugural meeting of the House of Representatives’ Rice Caucus was held on Wednesday.  The mission of the Rice Caucus is to educate House members and the general public about the role rice plays in the economy.”

“Crawford emphasized that this would not work for rice farmers. Instead, the House bill would allow rice farmers to select a revenue loss coverage plan that is similar to the old counter-cyclical payments.”

“The Agricultural Council of Arkansas appreciates the work of Chairman Frank Lucas and Ranking Member Collin Peterson in drafting the House farm bill.  We also appreciate the work of Congressman Rick Crawford, who has been a strong advocate for Arkansas farmers as a member of the House Agriculture Committee.”

Rick Crawford has introduced the Farm Risk Abatement and Mitigation Election Act, or the FRAME Act, to establish tax-deferred farm savings accounts to help farmers better prepare for drought or other disasters in the future.

“Often times federal disaster assistance does not arrive fast enough. In fact, some farmers in our district are just now receiving aid from requests they made in 2009. During times of disaster, farmers cannot wait for the federal government. Farmers who choose to invest in FRAME Accounts would not be hamstrung by a sluggish federal disaster response. FRAME Accounts would give farmers a safety net to stay in business when they are most vulnerable.”

Rick Crawford passed legislation to keep the Obama Administration’s EPA from taking more from ag producers’ pockets at a time they can least afford it.

Rick Crawford, standing up for American catfish farmers and better food safety for consumers, fought to keep the catfish inspection program at USDA.

“Arkansas Rep. Rick Crawford, with catfish producers among his constituents, then brought out the big stick…”

Rick Crawford was thanked by the Arkansas Rice Federation for his work on the Farm Bill.

Rick Crawford works across party lines when it’s in the best interests of farmers and ranchers.

“We want to protect the industry and grow it. That’s our goal.”

Rick Crawford will stand up to anyone proposing legislation that will hurt farmers, even members of his own party.

“At a time when more and more people have to rely on the productivity and stability of American agriculture, now is not the time to pose a threat to the very food source on which they rely.”

Rick Crawford was one of only 4 legislators to host a field hearing for the U.S. House Agriculture Committee, and he held it in Jonesboro, Arkansas.

“Crawford says the hearing is one of only four field hearings and will provide an opportunity to ensure the new Farm Bill protects rural communities and the viability of agriculture in the South.”