I wanted to take a moment and articulate three reasons why I would vote against the healthcare reform bill that will be considered in the House of Representatives Sunday afternoon. 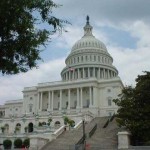